1.1.4.31
FIXED Rare but very nasty bug! Some registered users experienced ‘Wrong key!’ message with new version of Reminder. We are very sorry for the inconvenience.

1.1.4.30
FIXED When you have an active alarm for today, SCROLL LOCK was forced off periodicaly by flashing timer even if you switched off ‘Flash ScrollLock’ option in Settings.
ADDED Week of the year is also shown in Viewer form (0..53). Since you already set Starting day of the week in Settings/Preferences (usually Sunday or Monday), first week of the year begins also with this day.
ADDED All event forms (Recurring/Onetime, Cyclic and Position) now have record counters in it’s captions
FIXED Event was not always shown when clicked on it from Viewer form
FIXED When clicked on Today button in Calendar form you could sometimes get message ‘No events for that day’ even when there were events

1.1.3.26
FIXED If you did not finish entering event (for example position event), and moved to another event form (for example cyclic), then after clicking on Position button in Cyclic form you lost your unfinished event. It’s now fixed.
FIXED When Recurring form was shown for the first time, it sometimes had year 1999 in date field.
FIXED Viewer form was on top of other forms even when it shouldn’t be.
FIXED Sometimes, help file was not found automatically.
ADDED Added Report to tray icon menu.
ADDED Using tabs and keyboard in forms is now much better. Tab moves through controls in logical order, and you can now also change hour and minute of an alarm with following keys: UP, PGUP, NUM8, NUM9 or NUM6 (to increment), and DOWN, PGDOWN, NUM2, NUM3 or NUM4 (to decrement).

1.1.2.22
FIXED Starting day of the week (in Settings form) now also affects month shown in all date edit fields.
FIXED Very rare but nasty bug corrupted data when changing password and restarting windows after that.
FIXED Date edits for Easter calculation (in Settings form) now have grayed date glyph, so you can clearly see that they are not clickable.
FIXED Changed default behavior for private events (in Settings form) from “Do not show” to “Show asterisks (***)”.
ADDED Full version number is now shown in About form.
ADDED Only one instance of the application is allowed.
FIXED Setup does not overwrite database of previous installation any more.
FIXED Setup does not unnececerally register Reminder.exe any more.

1.1.2.21
FIXED If flashing SCROLL LOCK was on, hints on Calendar form were lost when SCROLL LOCK toggled state. This was because it was simulated keypress, and you loose hints when you press a key.
FIXED Regular tray icon hint was limited by windows to 255 characters. If you had many events on that day, the rest was lost. Now it is unlimited, and you can see all events for that day in a “big” hint style.

1.1.2.19
FIXED Memo with licence text in form Settings/Registration tab showed sometimes “If you read this text it means that you deleted file Licence.txt…” even if Licence.txt existed.
FIXED EXIT button in Calendar form has changed name to HIDE. Now only EXIT in popup menu on tray icon really terminates application.

1.1.1.18
ADDED SHIFT+LEFTCLICK on tray icon now displays Viewer form with all incoming events (LEFTCLICK on tray icon normally displays Calendar form).
FIXED Added events were not saved if windows was shutting down without exiting from Reminder first. This was a serious bug and it is corrected now.
FIXED After adding, changing or deleting events for today, Viewer form and tray icon hint are now immediately updated.

1.1.0.17
ADDED Events in tray icon hint (shown when mouse is over tray icon). You see the same hint as in today button in calendar form. Events are sorted first by level, then by alarm, and then by alarm time.
ADDED You can now navigate with keyboard through calendar with following keys: PGDOWN, NUM2 (previous month); PGUP, NUM8 (next month); END, CTRL+PGDOWN, NUM4 (previous year); HOME, CTRL+PGUP, NUM6 (next year), NUM5 (current month). 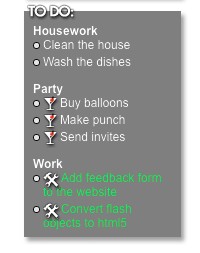 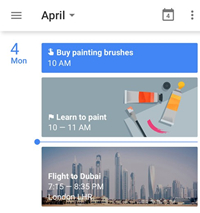